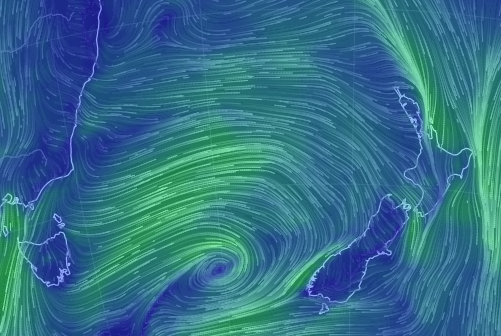 Incredibly intense downpours are continuing to develop east of Northland and Auckland city this afternoon, with the bulk of the downpours and thunderstorms just out at sea. As of 3pm Great Barrier Island, parts of Coromandel Peninsula and East Cape were most exposed.

Thunderstorms remain in the Hauraki Gulf area, not very far east of Auckland city – and are slowly drifting eastwards with the front.

Today marks the end of a week long easterly event for many parts of New Zealand – now a warm Australian airflow is moving in from the west.

This means westerly quarter winds will develop this afternoon and overnight and into Monday. On Wednesday and Thursday this will intensify with gales possible across parts of New Zealand.

The westerly airflow moving in over the next few days will be mild – with daytime highs in many areas in the late teens or early 20s. Not exactly snow or frost making weather.

Ahead and the rest of this week sees westerly quarter winds – a big change from last week – and while still more rain is coming for wet areas, there will be plenty of warm, dry, spells in the mix too.