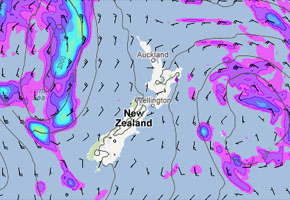 New Zealand will be between two low pressure systems tomorrow, technically speaking it will be an area of high pressure but it’s not really that high getting to 1012 hectopascals for most, up to 1014 in Northland. Just a quick fact, 1 hectopascal is the same as 1 millibar.

The result being we’ll have a settled day tomorrow over the country with light winds, watch for morning fog about the Central North Island and Waikato. There may be some remaining showers in the morning about the east coast of the North Island however they’ll clear with sunny breaks increasing and southwesterlies easing. There will most likely be some cloud about South Westland also with the risk of some drizzle in Fiordland.

Temperatures will be pleasant in most regions for a winters day. 15 to 16 can be expected about the Bay of Plenty, about the coast north of Taranaki, also north of Auckland. 13 to 14 degrees elsewhere.

13 to 14 can be expected in most South Island places, perhaps a degree or two cooler about Southland and Central Otago.

If tomorrow is as good as today was, then I’d expect that 13 or 14 would be on the cards for Central Otago and Southland.