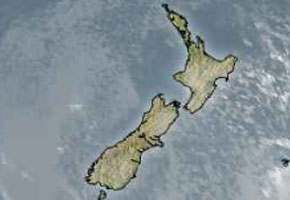 The southwesterly airflow over the country is easing today, it is still bringing cloud to the east coasts of both islands and also showers to Banks Peninsula and from Wellington through to Gisborne. Southland is also receiving a few showers still. Out west skies are sunnier but it doesn’t mean it is very warm, the warmest temperature going to Kerikeri at present on 13.6 degrees. Kaikoura is the coldest on 6.9 degrees.

Rainfall amounts from this system haven’t been very much, in the 24 hours to 1pm today the most rain fell in the Wairarapa with 22.6mm. The first part of that result was the initial southwest change that moved through yesterday afternoon then accumulations from as the night wore on.

There is a chance of a few rumbles of thunder along the east coast of the North Island later this afternoon, apart from that chances for thunder over the country don’t look to be too high in near future. There is a slight chance early next week somewhere for thunder perhaps as a pool of cold upper air moves over central areas of the country, it might just not be cold enough.