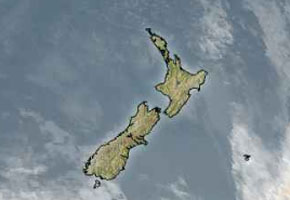 Today is looking more simpler if looking at the country from a satellite image, which means it is more settled although there is still a bit of a final southerly flush going on in the North Island which should ease tonight.

The east coast of the South Island and Nelson have clear sunny skies. The West Coast has areas of cloud and there will likely be some drizzle in Fiordland from about now for the rest of the day. Southland has mostly sunny skies also although there is a little bit of cloud on the coast.

Temperatures are warmest on the coast in Otago currently under the influence of a northwesterly airflow, I can see a few 17’s and even the odd 18 in the area, a little cooler in Christchurch today with a northeasterly breeze capping temperatures although that should ease this afternoon. It is a bit warmer inland and in South Canterbury, currently on 16 in Timaru.

The North Island has had some morning showers clear from most places and sunny breaks now increasing, although a few showers are hanging on to Gisborne and Northland this afternoon but they are looking to clear very soon. Winds look to be very gusty from the south in many places, those winds will ease later today. Temperatures are in the mid teens for most although cooler on the east coast, Wellington and about the Central North Island.

Though its clear now,the SSW is strong sounds like a jet engine and whistling,pine needles like rain.

haha yes Michael the south to southwesterly winds are looking to be quite blustery today, they should ease this evening.

Yes Aaron you need to come in the summer months,when a stationary anticyclone is in the tasman,its unbelievable then during the afternoons how aerodynamic rigid pine needles are.