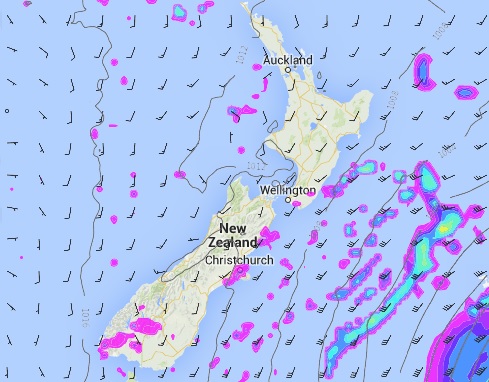 This coming week is looking more settled once ex TC Pam moves away, it’s not perfect and has cold air lingering in its wake for the east of both Islands on Tuesday but things gradually get better.

Tuesday has a brisk southwesterly airflow over New Zealand, strong in the east of the country. The West Coast of the South Island is the place to be with sunny weather, cooler out east with cloud and a few showers. Nelson and Marlborough are fairly good although a few isolated showers are possible inland late afternoon / evening.

Morning showers clear the east of the North Island, remaining fairly cloudy with gusty southwesterlies easing. Sunny areas in the west with southerly quarter winds, a few isolated showers possible late afternoon / evening. About the Bay Of Plenty, Auckland and Northland showers may become heavy in the afternoon with a risk of thunderstorms.

Another good day for the west of the South Island on Wednesday, mostly sunny with light winds. A few isolated showers are possible about Buller late afternoon / evening however. The east coast has periods of cloud and sunny spells, the odd very coastal shower is possible. For the North Island it’s a mostly sunny day with light winds, some cloud along the east coast with southwesterly breezes brings the risk of a shower or two.

South to southeasterly winds flow over the country on Thursday, sunny areas and some cloud for most. A few isolated showers possible late afternoon / evening about Buller again and also further north over Auckland and the Waikato.

North to northeasterly winds build over the country on Friday, it’s looking to be a mostly sunny day this time in the east. Out west expect increasing cloud and a few showers especially Taranaki northwards in the west and South Westland for the South Island.

Well i think so as any cyclone that came this year only went mainly gisbornes way…..so the cyclone season sure was a let down hence the reason it was so DRY….a cyclone is a good way to get heaps of rain to dampen things down ….what a bummer

You were right last evening, about damaging winds possibly not hitting the Eastern Waikato.
Here in Waihou, it did not get up much at all, guess not more than 50 kph.
just lots of rain, not heavy, just good drought breaking rain.
We dodged a bullet here.

Thanks Sam, traditionally eastern Waikato (from Waihou to the Kaimais) copes well with a strong southerly – it’s the strong south easterly that is a concern.  Great you got lots of rain – there will be many happy farmers in the North Island today 🙂

i have seen other weather events far worst than this over rated hoop la……..theres only been 2 cyclones that worth a mention…..bola and the waihine storm in nearly 50 years and both those killed people

So if Pam had just missed Vanuatu it would have been just an over rated hoop la?  That’s a tough standard to have – that only direct devastating hits count.  Considering 144km/h winds hit Great Barrier Island this morning Auckland and northern New Zealand was very lucky to avoid a direct hit – or it would’ve been a repeat of the storms you mentioned with significant damage and perhaps loss of life.

We have had less than 20 mils of rain from it.!!!!!!..we had more rain from the storm two days before 60 mils those SE winds dont give much rain here we needed it to be NE to get rain i was hoping for a real wetting rain also it had a dog of a name for a cyclone un like BOLA which was a good name as it bowled people over

You only have to look at satellite imagery and what happened in Vanuatu to see the sheer seriousness of what we could have been dealing with, so it’s pretty clear to see we got extremely lucky (well, mainland New Zealand anyway, the effect on the Chathams has yet to be seen.)  It may have been a “fizzer” as you put it, but count your lucky stars it was.