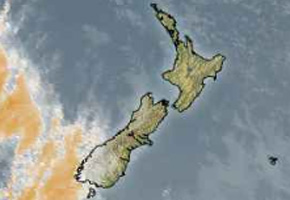 This is how it is meant to be, we’ve had the rain, plenty of it. So now the weather gods have graced us with a spell of settled weather to release the stress and it’s all happening at the end of the week which makes it feel that much better.

There is a few showers peppering the Coromandel, Great Barrier Island and about the east coast of Northland however and there may be a run of isolated afternoon heat showers in the same spots as they happened yesterday. Of course these showers today do have a summery quality to them so it may not seem all that bad if you are in those areas.

The West Coast of the South Island is a little cloudy and there is some drizzle about South Westland, high cloud is stretching across Southland and Otago also. Temperatures around the country are mostly sticking in the mid teens at present with higher figures in isolated pockets about the place, some with slighter lower temperatures too notably Wellington, some Central North Island areas and on the West Coast in the South Island.

Out of interest the highest rainfall figure I could find for the storm that moved into the Bay Of Plenty yesterday evening was 18.5mm an hour near Awakapong at 7pm, now that’s getting reasonably heavy. In contrast the heavy rain the affected parts of Christchurch in the middle of this month, the rainfall rates were no more then 6 to 7mm an hour however it lasted over a much longer period of time is the difference.

Aaron the “summery quality showers” are still wet,damp and pesky for those getting them. Mud-ly forecast 🙂

Least not fooled by the blue skies and mild temperatures this morning as if it still was on the line it be hanging limp on the line saturated by the rain.

Is that a riddle Michael? lol.