Bay Of Plenty warming up 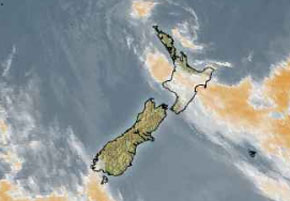 I think today is the first time I’ve seen a part of the North Island except on the east coast where the temperature has got above 20 degree’s so far this spring. Perhaps a few other places have been close or around the same level in the last week or two but they must’ve escaped my attention.

Whakatane is currently on 21.4 degrees and is the warmest place around the country at present. The front associated with the low pressure system currently just at the tip of the North Island has cleared northeastern areas of the North Island and moved southwards. In behind a lot of warm humid air has come in resulting in very nice temperatures.

It’s the type of situation where thunderstorms could pop up if enough heating got going at the surface and should they happen heavy downpours would be likely due to the humid nature of the air. Only issue today is there is a fair amount of warming in the middle of the atmosphere which may prevent any storms from happening, sort of like a lid really and won’t allow convection to take place.

Still, even though the main front has cleared and is moving a bit further south some areas are still quite cloudy like Auckland for e.g. with lower level cloud shrouding the city. Northland has received the most rain around the country for the previous 24 hours with 52.2mm of rain falling in Opouteke. The areas hit second hardest were the ranges of Hawkes Bay and Gisborne with 20 to 25mm of rain falling with this front

The South Island is mostly sunny today although east to northeast winds are a little cool along the east coast, Ashburton being a little more sheltered and further inland is warmer on 16 to 17 degrees whereas Christchurch city is on 13 to 14 at the moment.

My thunderstorm senses are coming together for Monday 1st October next week, it does look like a better opportunity for Canterbury then the recent window of opportunity mid this week on Wednesday so we will be keeping an eye on it here at WeatherWatch.co.nz.

Wanganui has reached 20c in the last few days.

Very true Michael, thanks for that. They have had a good spell of weather there generally speaking recently being sheltered from the northeasterly airflow.