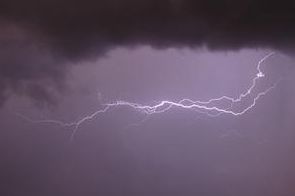 WeatherWatch.co.nz says the crown forecaster is predicting an increase risk of thunderstorms tomorrow across Bay of Plenty and the central North Island.

The crown forecaster says a southeasterly wind change is expected to move across the central North Island on Tuesday afternoon and evening.  “This change is expected to produce scattered heavy showers and a few thunderstorms” says MetService. “The thunderstorms are most likely around Taupo, Bay of Plenty and South Waikato during the afternoon, with a lower risk in the surrounding area”.

They says these thunderstorms could be quite squally with gusts of 60-90km/hr possible, as well as bringing brief heavy rain and hail.

In the South Island, scattered heavy showers are expected over the northern South Island on Tuesday afternoon and evening, with some small hail says MetService.

They says it is possible a few of these showers could turn thundery, but at this stage the risk of thunderstorms is considered low.