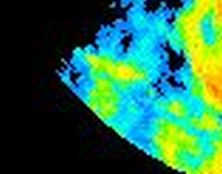 WeatherWatch.co.nz says torrential rain falling across parts of Bay of Plenty and Coromandel Peninsula this evening are of concern as it stalls over the area.

Heavy rain fell across Tauranga and Mount Maunganui this morning flooding shops and streets (see the photos on our homepage).  Heavy rain returned this afternoon combining with the same energy that passed over Auckland.

This afternoon and into tonight the rain has set in with one WeatherWatch.co.nz reader reporting a huge 24 hour rainfall total today.

“Totally underwater here in the low lying areas of Waihi Beach with 210.6mm last 24hrs” wrote Cathy Franzoi.  The area is still in a drought zone and heavy rain when the ground is dry can quickly lead to flooding with the ground not absorbing the rain, causing it to run off into waterways, leading to flash or rapid flooding.

Waihi Beach seems to be hit particularly hard tonight with a storm cell stalling overhead.  Some parts of Auckland had similar downpours today but many only lasted 15 to 60 minutes – for some parts of Bay of Plenty and Coromandel it has been off and on for several hours at a time today.

WeatherWatch.co.nz says low lying areas of the regions could suffer moderate to serious flooding tonight and residents should be aware of surrounding water levels and listen to advice from local authorities.

Tonight’s deluge will ease gradually overnight – but will be replaced by another rain band on Sunday.  At this stage it’s expected that Sunday’s rain won’t be as intense as Saturday, but heavy downpours are still likely meaning the risk for slips and further flooding will remain for at least another 24 to 48 hours, with further rain or showers on Monday.

But the immediate risk is tonight.  Police are advising motorists to keep off the roads.

WeatherWatch.co.nz says the storm cell over Waihi Beach remains in place and torrential rain across the western BOP and eastern Coromandel may last a number of hours longer increasing the chances of more serious flooding.