Bay of Islands – Playful dolphins put on a show 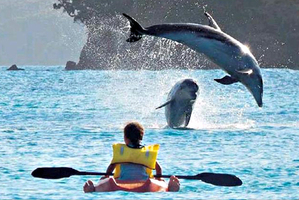 A group of whanau staying on land in the Bay of Islands has been treated to a spectacular aerobatic display by a pod of dolphins who joined them for “a play” in Kaimarama Bay.

Andrew Snowden, who took the photo of his grand-niece Jorjah Snowden, 8, getting a good look at the dolphins performing on Monday, said it was an awesome experience for the roughly 50 whanau members in the water.

“We’ve got whanau land that we go to every year and [on Monday] there were about 50 of us in the water when these three dolphins cruised in and decided to have a play with the humans,” Mr Snowden said.

“They were beautiful creatures and were really having a great time, flipping out of the water and putting on a great show for about 45 minutes.”

He wondered, with plenty of bait fish in the bay, if the dolphins had just had a feed and were working off their lunch with a bit of an aerobatics display for those not as fleet in the water.

Mr Snowden said Jorjah was absolutely blown away to get so close to the dolphins.

“She wasn’t scared or anything. She just loved it … we all did.”

He said the whanau often watched the dolphin tour boats taking people out into the Bay looking for dolphins, but they just sat and waited, knowing the dolphins would turn up in Kaimarama Bay at some stage.

“They come into the bay most years around this time. Last year we had up to about 40 of them here,” he said.