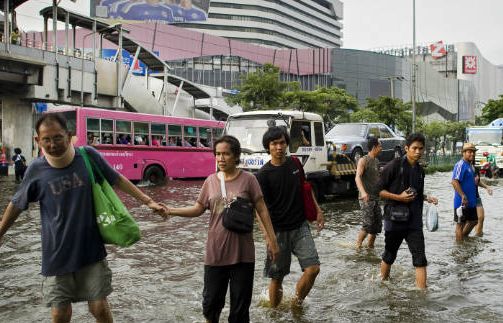 The death toll from Thailand’s worst flooding in half a century reached 506 Sunday as floodwaters inched toward downtown Bangkok, the interior ministry said.

By Sunday, authorities had ordered evacuations for residents in 11 of Bangkok’s 50 districts. Floodwaters were threatening the city’s subway Sunday, but officials said all 18 stations were operating normally, though some station entrances were closed.

As water crept closer to the city’s central business area, Chaiwat Rattanawitthayapol shopped for water pumps and sandbags to protect his home.

“I don’t know what the government is doing,” he said. “They promised that water would be diverted to the east and west. … Why is water coming closer and closer to central part? I don’t see any improvement.”

At the sprawling, 27-acre Chatuchak Weekend Market, only about 10% of the booths were open. Some merchants reduced prices to draw shoppers.

“There are a lot less people (who came) today. … People are afraid of flooding,” one shop owner told CNN.

Meanwhile, Arun Sricharoon, the market’s director, kept a close eye on the approaching waters. A 2-foot (60-centimeter) wall around the market should help prevent flooding, he said.

“I think the wall is still able to handle the flood,” he said. “But if water spills into the market, and if it affects the safety of shop owners, then we will announce the (market’s) closure.”

Across the country, the flooding — now in its third month — has affected 25 of Thailand’s 64 provinces.

In the provinces of Nakhon Sawan and Ayutthaya, cleanup efforts were under way.

On Saturday, Prime Minister Yingluck Shinawatra visited Nakhon Sawan, which was inundated more than a month ago.

She vowed to continue government efforts to fight flooding, the MCOT news agency reported, and said the province would be a national model for rehabilitation.

Floods are an annual occurrence in the country but have been particularly acute this year, and some residents and analysts have criticized the government’s response.

“Now the government is sending a mixed signal that the situation is fine, but the truth is it the situation far from over,” political analyst Supong Limtanakul told CNN. “It is a slow suffocating death of Bangkok business area.”

Supong said the government did not have enough resources to deal with floodwaters, noting that officials had recently asked the private sector for water pumps to help drain water out of Bangkok.

Bangkok’s central business district was still dry, but other parts of the bustling metropolis of 12 million people were flooded.