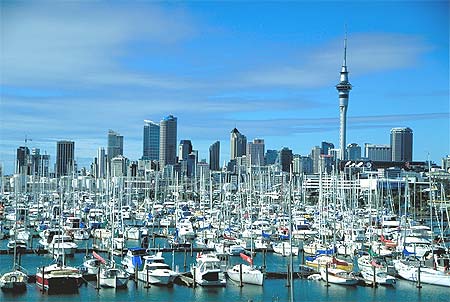 The BBC have listed the top 10 backpacking cities in the world ( in regards to climate) and Auckland is amongst them and comes out on top!

Auckland, New Zealand
In Auckland, the climate is almost subtropical with very mild winters and warm, rather humid, summers. Daily maximum temperatures range from 13°C in July to 23°C in January / February. The wettest months are May to August.
Bali, Indonesia
Bali has a tropical climate, which is influenced by the seasonal shift in wind direction brought about by the monsoon. The dry season is from April to October and the wet season from October to March, although it can rain at any time of the year. The best months to visit Bali are May to August when the rains are lightest and temperatures cooler. Sea breezes around the coast can make the high temperatures feel more pleasant. Temperatures vary from 24°C to 30°C, but can be much lower in the highlands.
Bangkok, Thailand
Bangkok’s climate is dominated by the Asian Monsoon, which means that the wettest months are from May to October. Temperatures remain constant year round with an average daily maximum of 31-34°C. There is a marked drop in humidity from morning to afternoon. The best time to visit is between November and February, when rainfall is lightest and discomfort from heat and humidity is at is lowest.
Cape Town, South Africa
The climate of Cape Town is similar to that of the Mediterranean, with mild wet winters and dry settled summers, although occasional rainstorms occur. Average daily maximum temperatures range from 17°C in July to 26°C in January.
Hong Kong, China
Dominated by the Asian Monsoon, Hong Kong experiences the seasonal reversal of wind direction that brings the wet season from May to September and the dry season from October to March. July to September is hot and humid, with the added risk of typhoons moving up from the South China Sea. December to March tend to be the most pleasant months to visit Hong Kong, although minimum temperatures as low as 0°C have been recorded. Maximum daytime temperatures average 13°C in February to 31°C in July and August.
Los Angeles, USA
California is one of the sunniest states in the USA, with 12 to 14 hours of sunshine in the summer. Rainfall is lowest from July to September, but with maximum temperatures of 27°C and high humidity combining with smog, conditions can be unpleasant at this time of year. Winters are wetter but, with temperatures averaging at 18-19°C, can still be pleasant.
Lima, Peru
The most rainfall the arid coast of Peru sees a month is about 8mm, however from April to December Lima is frequently shrouded by coastal fog, only breaking to give about one or two hours of sunshine. From December to April, Lima sees between five and seven hours of sunshine. Temperatures reach about 28°C but can be unpleasant in the high humidity. Every few years, the weather phenomenon known as El Niño can bring a marked change in weather.
Mexico City, Mexico
The climate of Mexico City is temperate, with temperatures averaging 19°C in December / January, and 25-26°C in April and May. Being at an altitude of 2309m/7575ft has an effect on the climate, with temperatures below freezing in January and February not unknown. The best time to visit is probably April – May before the wet months of June to September.
Singapore
The climate of Singapore is hot, wet and humid throughout the year. Temperatures vary little from month to month, but the lighter winds in March and September can make these months more unpleasant.
Sydney, Australia
Sydney has a warm-temperate climate, with no real cold season, hot summers, and rainfall only slightly higher from February to July. High temperatures and high humidity can make the summer oppressive, so the best times to visit are probably March-April and September-October when the days are warm and the nights mild.