Aviation – Wow! Check out the undisputed ‘king of the skies’ – the world’s biggest aircraft (+VIDEO) 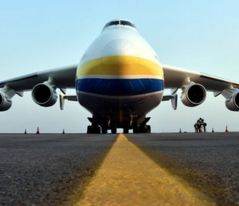 The undisputed superstar of the skies — the biggest airplane in the world — is taking flight on a rare delivery mission across three continents.

The Ukrainian cargo jet named “Mriya” is one of a kind. There is no other.
That’s why the gawkers showed up Tuesday in Prague. They watched in awe as this big boy defied gravity before it touched down at Vaclav Havel Airport in the Czech Republic.
Officially designated as the Antonov An-225, the plane was developed in the 1980s to carry the Soviet version of the space shuttle on its back.

Mriya has scheduled stops in Turkmenistan, India and Malaysia before arriving this weekend in Perth, where thousands of fans are expected to greet the plane and its six-member crew, according to the Antonov Company.
When the shuttle program ended, the plane morphed into the world’s coolest flying moving van.
While in Prague, workers will load Mriya with a generator weighing 130 tons for delivery to Australia.
Here’s a little perspective on what makes this thing so special.
We live in an age when most airliners are powered by two or four jet engines.
This monster has six.
Its wingspan measures 290 feet (88 meters).

That’s longer than five 53-foot semi-truck trailers set end-to-end.
Mriya’s cargo hold is actually longer than the Wright Brothers’ historic flight in 1903.
Its maximum total weight at takeoff: 640 tons.
That’s more than twice as heavy as the Statue of Liberty.

To carry all that weight Mriya has 32 wheels spread across its oversized landing gear.

This beauty has other nice features … like the way its nose opens to allow cargo loading through the front end. Fans also like the design of Mriya’s split tail. (Sweet!)
It’s rare to see it in action.
Lately, Mriya has been making deliveries once — maybe twice — a year.
If you need to fly something big — like gargantuan oil industry equipment or a giant electric generator — this is the plane you want.
The An-225 holds world aviation records for flying heavy payloads. It set one in 2004 when it flew a 247-ton piece of oil pipeline machinery to Uzbekistan.
From its pickup location in Prague, Mriya has scheduled stops in Turkmenistan, India and Malaysia before arriving this weekend at its final destination in Perth — on Australia’s west coast.
Thousands of spectators are expected to greet the plane and its six-member crew when it arrives, according to the Antonov Company.
Then it’s back to home base in Kiev, where planners will chalk up another “mission accomplished” for the biggest plane in the world.