Aviation: WATCH – An Airbus A320 crash while being moved (VIDEO) 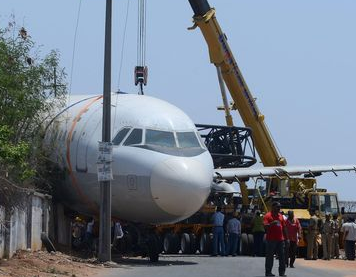 Footage has emerged of the moment an Airbus plane crashed to the ground while being moved.

The disused Air India A320 aircraft was being transported near Begumpet Airport in Hyderabad yesterday when the incident occurred. It was being shifted from the airport to the airline’s cadet training facility via a crane mounted on top of a 16-wheelbase transport carrier.

They intended for the aircraft to be used to train flight attendants, engineers, pilots and security staff.

However, it was the first time such an operation had been carried out in the country, and it didn’t go to plan. The carrier ended up toppling under the weight of the plane, sending it crashing into a wall below.

Deputy Commissioner of Police (North Zone) N Prakash Reddy told PTI News: “It was an unused aircraft and was being shifted to the training establishment at a distance of about 4km from the airport for training purpose.

“Crane services had been engaged and while the aircraft was being lifted today, the crane bars got bent and it collapsed at around 7.15am.”

The plane and the crane were badly damaged in the incident, but luckily nobody was injured.