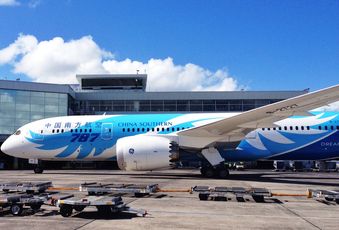 The China Southern Airlines aircraft, which flew in from the Chinese City of Guangzhou, touched down at 3.56 pm.

In July China Southern announced it was bringing forward the daily 787 flights to October from December, when the carrier had previously intended to begin the service.

A second China Southern 787 will service the route three days a week over the peak summer season from December 4 to March 1, taking the total number of weekly flights to 10.

The Guangzhou-based airline’s Dreamliner has 228 seats and is the first Dreamliner to have a first-class cabin.

It was grounded globally earlier this year after battery systems began smouldering during flights.

A fire broke out on an Ethiopian Airlines 787 while it was parked at London’s Heathrow Airport in July.

Air New Zealand is due to have its Dreamliners – a stretch version of those currently in service – delivered from the middle of next year, more than three years late.