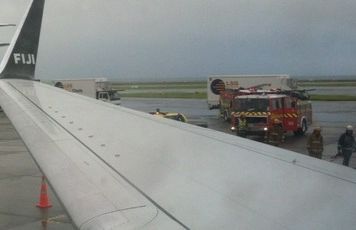 A Fiji Airways aircraft made an emergency landing at Auckland International Airport this morning.

Flights were delayed at Auckland Airport as a result.

Catherine Jehly said there was a “loud banging on the right side of the plane soon after takeoff” but “everyone was pretty calm on board”.

Fire Service shift manager Paul Radden said the service received a call to say one engine of the Fiji Airways plane was out due to a fire.

He says approximately 14 fire trucks responded, including specialist ones like foam tenders and hose layers.

Mr Radden says upon arrival, the aircraft approached and landed safely with no incident.

He says fire crews followed the aircraft to the gate and remained on stand by while engineers checked the engine and passengers were safely off-loaded.