Aviation: Completely new jet unveiled for US fliers, first of its kind in nearly three decades 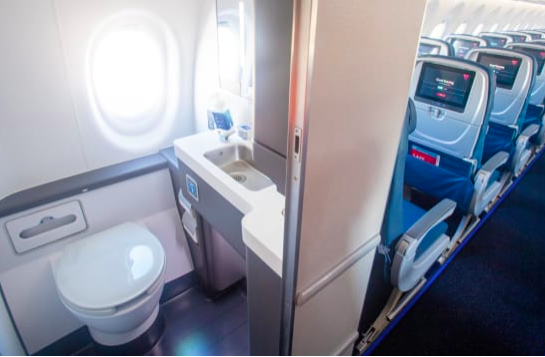 By Thom Patterson, CNN — For some folks, flying on a brand new airliner is almost as exciting as riding in a spanking new car. So get ready air travel fans: Beginning in January, travelers in the USA will get to fly on the first newly designed large single-aisle airliner in nearly three decades.
Delta Air Lines, the world’s second largest carrier, unveiled its new Airbus A220-100 during a ceremony Monday at its headquarters at Hartsfield-Jackson Atlanta International Airport. With the roar of jet engines in the background, excited employees lined up to tour Ship 8101, as Delta named it, the first of 75 A220s that Delta is expected to bring into its fleet over the next two to three years.
SWISS, Korean Air and airBaltic already fly these jets, but Delta will be the first carrier in the US. Taking the stage at the celebration, Delta CEO Ed Bastian welcomed the A220 as “a beautiful new member of the family.”
This $81-million jet has racked up several firsts:
Delta plans to use the A220 as part of a fleet modernization program. Some airplanes on Delta’s domestic routes are more than three decades old, with retro-fitted passenger seat power ports and no in-flight entertainment systems.
“The simple idea is to provide customers what it is they tell us they want,” said Delta Senior Vice President and Chief Marketing Officer Tim Mapes. “That means space, innovative technology and comfort. All of those things are evident in this plane.”
The A220s, along with about 100 other new jets, will replace 20% of older, less-efficient aircraft by 2020, according to Delta. The airline also plans to replace 25% of its domestic fleet over the next three years, Bastian said, “taking delivery of more airplanes than at any time in our history.”
One reason behind this move is a massive projected increase in passengers.
Last year, worldwide air passenger traffic crossed 4 billion for the first time, up 7.3% from 2016, according to the International Air Transport Association. By 2036, that number is expected to nearly double.
In the US, about 965 million passengers flew commercial airlines last year, an increase of more than 3%, according to the Department of Transportation. By 2036, the industry predicts the number of passengers in the US will exceed a billion.
Airlines are looking to meet that need with the help of a new generation of jets designed to offer creature comforts travelers want while keeping profits strong. The Airbus A220-100 is one of those new jets.

Once you step aboard this plane, you immediately notice it just feels bigger than a typical single-aisle airliner. Nearly 7-foot-high ceilings and windows larger than many other kinds of jets.
The cabin is a spacious 10-feet, seven-inches wide.
View image on Twitter

Twitter Ads info and privacy
Delta has designed its A220-100s to seat 109 passengers â€” including 12 in first class, 15 in premium economy and 82 in economy. Up front, first class seats are in a 2-2 configuration with head rests and other accoutrements, including water bottle holders and adjustable arm rests.
Delta’s new A220 seats 109 passengers in three classes — all with seat-back in-flight entertainment screens.
Thom Patterson/CNN
In Economy, travelers may like the seat width â€” measuring 18.6 inches â€” the widest main cabin seats in Delta’s fleet. If you’re wondering about leg room in coach, the seat pitch ranges from 30 to 32 inches. Delta’s Boeing 717s, which seat about the same number of passengers, have a seat pitch of 31 inches in economy.
Another reason the main cabin feels big is the 2-3 seat configuration. That means fewer middle seats — which is great news if you hate that “trapped feeling” some folks get when they’re in a middle seat.
If you’re in a window seat, you’ve got a bit more shoulder room, thanks to cleverly designed indentations in the cabin walls. For the window shades, this plane went old school. No push-button electronic dimmers required. Just your typical pull-down window shades will do fine, thank you very much.
Delta’s A220 also offers full LED spectrum lighting, so crew members can change the color and brightness of the interior light based on various moods throughout the day.

Restroom with a view

Traveling with small children is pretty common, so it’s nice to see airliner restrooms are getting more family friendly. The lavatories on this plane are large enough to change babies — and a pullout baby-changing table is available in the right rear restroom. They’re also large enough for a 6-foot-plus-tall person to stand up straight — which isn’t always the case on other jets.
There are three lavatories on this plane. Remarkably, one of them has something you don’t see very often in airliner restrooms: a window.
– Delta Air Lines’ new A220 includes a room with a view. Delta Air Lines
“The engineers saw an opportunity to put one in and we said ‘go for it,'” said Bastian.
It’s hard to know if the window will result in longer waits for the restroom, because passengers will be inside snapping photos.

The jet can fly nearly 3,400 miles, so Delta says it plans to use it for direct routes to cities that don’t usually fill larger planes.
If you have plans to fly from New York to Dallas-Ft. Worth or to Houston, Delta is hoping you’ll take notice. Those are two of the first routes the airline plans for these new jets beginning in January and April, respectively.
By the way, it’s no coincidence that those two cities are dominated by Delta’s competitors, United Airlines and American Airlines. Will the A220 allow Delta to give United and American a run for their money in these markets?
“Pretty good chance of it,” says Richard Aboulafia, aviation industry analyst at Teal Group.
The A220 also helps increase profits by saving fuel. Airbus says it’s 20% more fuel efficient than similar sized jets.

But for many aviation enthusiasts, the weirdest thing about the A220 is the fact that for the first time in Airbus’s nearly half-century-long history, it’s selling a plane designed and built by another company.
How did that happen?
Basically, France-based Airbus stepped in last year and bought a controlling interest in the plane from a rival manufacturer — Canada’s Bombardier. Before that, the plane — and its larger version — actually had different names — the CS100 and CS300. Airbus simply renamed them the A220-100 and A220-300.
“A truly shocking moment,” said Aboulafia. “You can’t write this stuff in a novel, no one would believe it.”
– Two of these Pratt & Whitney geared turbofan engines help the A220-100 achieve 20% more fuel savings than similar jets. Thom Patterson/CNN
Experts say Bombardier was driven to make the deal because they feared the Trump administration’s trade policies with Canada would sink the company.
“Bombardier simply said, if we keep going with this program on our own, it’s doomed and it will drag us down with it,” Aboulafia said. “So by giving it to our arch rival, Airbus, then they can rescue it and at least we can build structures for it.”
“Airbus has spent the past ten years trying to kill this jet â€” and now it gets it for free,” he said.

Of the four major US carriers, American Airlines boasts the youngest fleet. Its planes are an average of 10.5 years old, according to airfleets.net. Delta’s fleet is the oldest — averaging 16.3 years.
But that statistic will likely begin to change next year when Delta accepts delivery of new Airbus A330neos. These fuel-saving twin-engine widebodies will be used for medium haul trans-Atlantic routes and flights connecting Asia with the US West Coast.
– Delta plans to add new Airbus A330neos to its fleet next year. Thom Patterson/CNN
Another jet — Boeing’s super-efficient 777-9X — is expected to make its first test flight next year. That plane â€” expected to be the world’s largest twin-engine jet â€” will have an all-metal body, but its wings will be made from light-weight, super strong carbon fiber composite material.
Cathay Pacific, Lufthansa and Emirates are among several international airlines that have ordered the 777-9X.
Also next year, Boeing is widely expected to announce its plans to build a new midsized airliner â€” which has already been unofficially nicknamed the 797.
It all means that your chances of flying on a newer plane are rising, as more air travelers take to the skies.
– By Thom Patterson, CNN (WeatherWatch.co.nz is proud to be a CNN affiliate)