Aviation – Air France flight has near miss with volcano (+VIDEO) 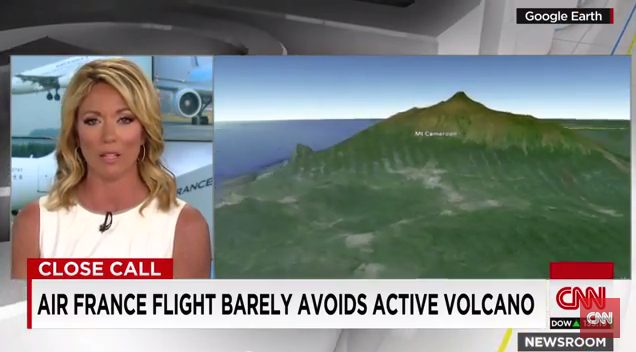 An Air France passenger jet had a near miss with an active volcano in Africa earlier this month, according to French aviation authorities who are investigating the incident.

Air France Flight 953, a Boeing 777 with 37 people aboard, was on a short evening journey from Equatorial Guinea to Cameroon on May 2 when it steered off its planned route to avoid thunderstorms.

As the aircraft turned back toward its destination, the city of Douala in Cameroon, it got too close to Mount Cameroon, the highest mountain in the region whose volcano is still active, said the BEA, France’s air accident investigation agency.

The “pull up” alarm started sounding and the pilots responded by ascending from 9,000 feet to 13,000 feet, the BEA said. The alarm stopped and the flight went on to land in Douala, it added.

In a list of open investigations, the agency described the close shave as “a serious incident” that involved “controlled flight into or toward terrain.”

Air France said Flight 953’s pilots responded “immediately” to the alarm from the ground proximity warning system “by applying the appropriate procedure.” It said its pilots “receive regular training in this type of maneuver.”

An Air France official told CNN affiliate BFMTV that the passengers were unaware of the incident at the time.

The airline said in a statement that it is conducting its own internal investigation and has also given more information to the crew about “the specifics of the land around Douala.”

The crew members are receiving educational, managerial and medical support, it added.

Flight 953 had departed from Malabo, which is the capital of Equatorial Guinea and is situated on Bioko Island, off the western coast of Africa.