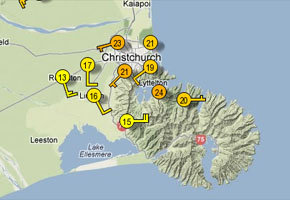 Nothing too exciting happening today, out east in both the North and South Island temperatures are warm under the influence of northwesterly winds. South of about Timaru there is a real contrast in temperatures at the moment between there and Christchurch for example due to a southerly flick making it’s way north along the east coast, Timaru is on 13 degrees after hitting temperatures in the low 20’s by late morning. Ashburton is getting it now and it looks like Christchurch may cool down significantly soon as this change moves through.

It may be short lived though returning to the west or northwest after this front passes through, and just a note even though there is a front due in Christchurch it is lacking in moisture and is quite dry so wet weather gear shouldn’t be needed but a jersey would help! Seems a bit of an odd thing to say with the warm temperatures that have been experienced so far today but there you go, that’s the weather for you.

There hasn’t been any large areas of rainfall over the country for the past 24 hours although the thunderstorms that moved through Hawkes Bay, Gisborne and eastern Bay of Plenty yesterday would’ve delivered a few short sharp downpours. The windiest place currently is New Plymouth with 46 km/h winds from the west. The warmest place is Christchurch on 22.3 degrees however that is about to change very soon, I can actually see some wind flags in the south of the city changing to the south now so get that jersey ready!