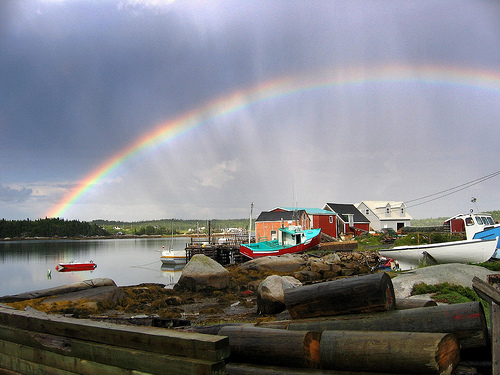 March didn’t deliver the usual start to Autumn but April seems to be making up for a little lost ground.

This week we’ve seen temperatures ranges and variable skies over many parts and although it might calm down this weekend for many of us next week is still looking more boisterous.

Right now we have a decaying front in our midst which isn’t quite delivering as much precipitation as expected.

Showers have lessened overnight for southern and central parts of New Zealand and in some eastern areas they haven’t even turned up.
The northern regions of the South island have the front slowly falling apart presently and Wellington might see a shower or two but more of a chance tonight.

Frosts aren’t really featuring this morning like the previous couple of days and temperatures are a few degrees milder in some cases but the breeze or wind is also about.

The weekend sees a high moving into the picture and much of the nation is on track for sunshine on Sunday but perhaps the lower North Island tomorrow could take a bit to get rid of early showers.

West Coasters should notice darkening skies on Sunday but most of the rain or showers for the region won’t be until Monday plus we can probably put Tuesday and Wednesday into the equation for many other districts.

The mildest day across the next three will be today for the upper north and Mainlanders on Sunday especially in the east from Kaikoura to South Otago and Southland.

“Today and this weekend is a little topsy turvy which is what you’ll often see during the middle of Autumn” says weather analyst Richard Green. ” A mix of sunsine and some showers here and there with cooler breezes at times but warmer temperatures at other moments is pretty much the norm.
This week we’ve seen frosts in central and southern parts but also temperatures well into the twenties. It’s not an easy season to dress for with such fluctuations”.

“It looks like the weekend is more settled than next week” says head weather analyst Philip Duncan.
“Winds are set to pick up and rain or showers with some susnhine at various stages is what appears to be taking shape and still looks the most changeable week overall for the year to date”.

WeatherWatch is still keeping an eagle eye on next week with a fairly fast moving depression coming in from the north Tasman and then a west to sou’ west flow later in the week.
Will rain help ease the drought or will it just be random showers that will result?
Watch this space.