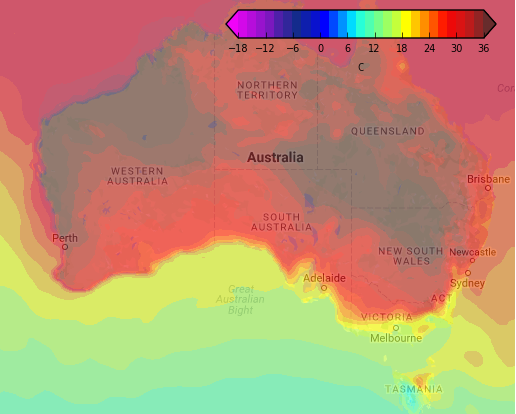 Although autumn is on the way, the Bureau of Meteorology has warned the hot weather is likely to continue, with warmer than average temperatures forecast for most of southern and eastern Australia.

The BOM’s climate outlook predicts a drier than average March and May for the southern two-thirds of Australia; a result of forecast higher than normal pressure off eastern and southern Australia.

All capital cities except for Darwin have at least a 65 per cent chance of exceeding the median maximum temperature.

Similarly, autumn minimum temperatures are likely to be warmer than average across most of the country, except for northern WA and northern NT.

“The periods between the waves of extreme heat also saw above average temperatures over large areas of east and south-east Australia,” the BOM said in a Special Climate Statement released earlier this week.

“It was the consistency of high temperatures more than the extreme temperatures themselves that made early 2017 an exceptional event.

“During these heatwaves, daily maximum temperatures across south-east Australia exceeded 40 degrees Celsius over very large areas and were typically 8 to 12C above the January and February averages.

“The highest temperatures recorded during this period were 48.2 C at Tarcoola, SA, followed by 47.9C at Walgett, NSW; these are new February high temperature records at both these sites.

“While the January 1939 south-east Australian heatwave remains one of the most significant in recorded history, the frequency of such intense large-scale heatwaves has increased across spring, summer and autumn, and especially over the last 20 years.”

Even between heatwaves, the heat was out of the ordinary Ã¢?? not since the summer of 1938-39 has such a large area of NSW Ã¢?? more than one third of the state Ã¢?? recorded 50 or more days of 35 degrees Celsius or above during summer, BOM said.

Both sites exceeded the previous NSW record for the longest run of days over 35C.

Meanwhile in Queensland, 13 weather gauges broke records for their hottest February day, including St George on 46.8C, Birdsville on 47.1C and Amberley on 43C.