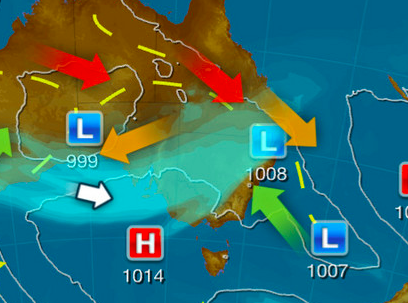 A spring storm outbreak is underway across parts of New South Wales this week, although the season has taken a while to get going this year.

Violent thunderstorms caused heavy rain, large hail and blustery winds in a number of districts during the last two days. For some areas, these have been some of the first big storms of the season.

Thunderstorms typically become more active during spring as temperatures climb across the state and winds change direction, allowing more moisture to be carried in from the Tasman and Coral Seas.

The three key ingredients needed for thunderstorms to develop are:

These ingredients are all in the pot this week, which is why we are seeing storms each day.

Despite this week’s light show, it has been a sluggish start to the storm season this year for much of the state.

A look back at October reveals that statewide rainfall compared to average was much lower than the previous five months. This is largely due to the decline of the strongly negative Indian Ocean Dipole that brought New South Wales its wettest April to September on record.

It is also a result of another broad-scale pattern affecting Australia, called the Southern Annular Mode (SAM). The SAM is an index that measures the north-south displacement of the westerly wind belt surrounding Antarctica.

We are currently in a negative phase of the SAM. At this time of year that can mean westerly winds become more prevalent over New South Wales, which was evident throughout October.

The decaying negative IOD and predominantly negative SAM in recent weeks have helped to reduce the amount of moisture and heat available across New South Wales. This has effectively suppressed two of the key ingredients needed for storm development.

This week, a broad area of low pressure is lingering across eastern Australia. After a slow start to the season, this feature is providing an avenue for heat and moisture to cross the state over a number of days. As a result, storms have become a daily feature and will continue over the next few days.