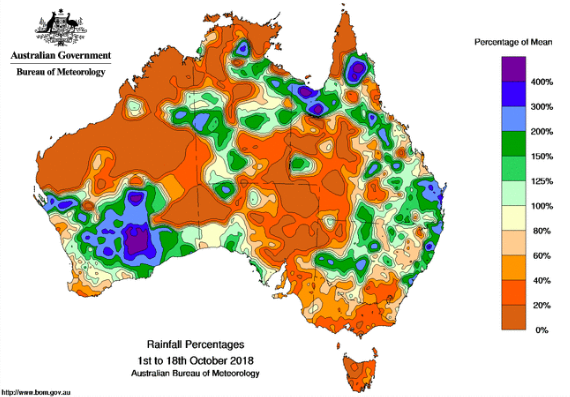 Many areas of Australia have seen a remarkable shift in the weather during October.

Last month was the driest September on record for Australia as a whole and its driest calendar month since April 1902. Most of the country received less than 20 per cent of its average rainfall during September, with the exception of a few small areas.

In Western Australia’s Goldfields, Kalgoorlie has already recorded 66mm of rain this month. This is well above the 2.8mm they recorded during September and makes this their wettest month since early 2017.

Some early-season storms in northwest Queensland brought 59mm of rain to Burketown this week. This is more than four times the October monthly and makes this their wettest October since the 1970’s.

In NSW, Lismore’s running monthly total of 225mm as of 9am on Friday makes this ites wettest October in seven years. This is well above their long-term October average of 73mm.

A sequence of upper level troughs and lows interacting with feeds of tropical moisture have produced this month’s much needed rain. The recent development of warmer than average sea surface temperatures to the northwest of Australia and along the NSW coast has also helped fuel this month’s rainfall. Warmer seas lead to more evaporation, which puts more moisture in the atmosphere to create rain.

While many areas of the country have picked up some much needed rain this month, there are also places that have continued to miss out. More widespread and frequent rain will be needed to eradicate the long-term serious to severe rainfall deficiencies that  are still affecting large parts of the country.