Australia: Winter ‘soaking’ for the southeast 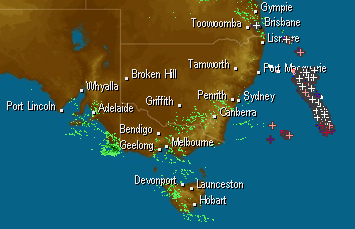 Parts of southeastern Australia record their heaviest August rain in over a decade.

The greatest totals were confined over Victoria’s North East and the New South Wales Snowy Mountains, where between widespread falls of 25-35mm were collected. Geehi airstrip managed to top the list however with 44mm falling to 9am today. Elsewhere, Bendigo’s 17mm makes it the heaviest day of rain since early November.

As the afternoon turned to night, a cooling airmass allowed this moisture to fall as snow over the resorts, with Thredbo picking up a welcome 10-15cm overnight. It wasn’t all smooth sailing over the Alps however, as north/northwesterly wind gusts ahead of the front strengthened to 117km/h at Thredbo Top Station. Mt Hotham saw destructive gusts of 137km/h during the afternoon making for some very unpleasant conditions.

Although the winds have eased somewhat, visibility will be poor at times on the mountains with continuing snow showers, cloud and gusty bursts. By Tuesday, we should see a brief reprieve in winds, with good cover on the ground.