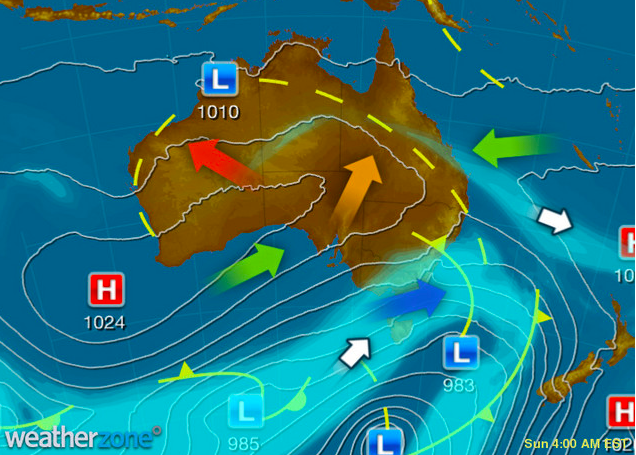 An unseasonably hot air mass is breaking April records across parts of southern and eastern Australia this week.

A pool of heat that brought Australia’s latest 45 degree days on record in the Pilbara two weeks ago has spread south and is now causing unprecedented April warmth in Adelaide, Sydney and many places in between.

Sydney registered its highest April temperature in 160 years of records on Monday afternoon, reaching 35.4 degrees at Observatory Hill. This beat the city’s previous April record from 2016 by more than a degree.

Last Tuesday was Adelaide’s third consecutive day at or above 34 degrees, which is the city’s longest three-day spell this hot during April in 132 years of records.

Mildura’s 38.1 degrees just after midday last Tuesday is a new April record for Victoria, beating the state’s previous record of 37.8 degrees from 1986, also from Mildura.

Canberra’s five days above 28 degree between the previous Thursday and last Monday was the city’s first such spell during April on record.

So, what’s caused this summer-like burst of heat so late in the year?

A stubborn ridge of high pressure across southern Australia, called the subtropical ridge, has been deflecting cold fronts to the south of the country during the last couple of weeks.

More recently, a broad trough of low pressure over western and southern Australia has helped transport this hot air from the nation’s western tropics to our southern states.

This weather pattern is a bit odd for this time of year as April is when we typically see cold fronts penetrating further north. During March, the mean sea level pressure was about two hectopascals higher than usual across southern WA, SA and NSW.

In addition to the weather features that are causing this record-breaking April hot spell, it’s possible that our planet’s warming climate has also played a part.

Australia’s climate has warmed by around 1 degree celsius since 1910, according to the Bureau of Meteorology’s 2016 State of the Climate Report. According to the Australian Meteorological and Oceanographic Society’s Statement on Climate Change, mean temperatures have warmed in all parts of the country during this time.

However, we aren’t yet able to say if, and how much, of a hand climate change has played in this current bout of unseasonable heat, without performing an event attribution study.

Climate attribution studies aim to determine the likelihood that an extreme weather event was helped by climate change. Some events are and some aren’t. These studies involve three main components:

While it’s too early for the results of an attribution study to determine whether or not this record-breaking autumn heat is related to climate change, it’s already proven to be unprecedented on a number of measures in multiple locations.