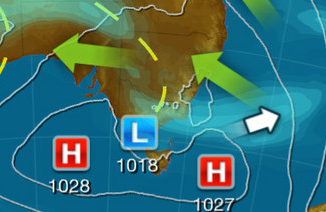 A waterspout was spotted off the coast of Sydney this morning.

The small but well-defined funnel could be seen descending beneath a layer of low, dark stratus cloud near Tamarama Beach.

Waterspouts form when cool air moves over relatively warm water, often behind a cold front. These conditions can cause warm and moisture-laden air near the water’s surface to rise rapidly and rotate. As the rising air cools down, liquid drops start to form and get caught up in the spinning column of air, producing a waterspout.

The type of waterspout that formed in Sydney this morning was not a tornado.

Waterspouts are more common along the east coast of Australia than most people realise. Most either go unseen or unreported, unless they form near a populated part of the coast like Sydney.

– Sorry folks no photos or video of the Waterspout with this story sadly.