Australia: Warming and storming in NSW 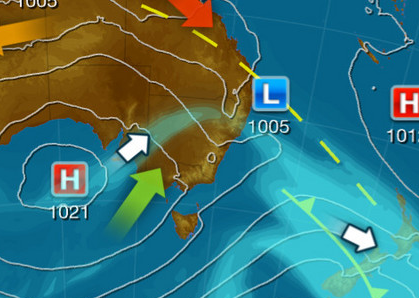 Heat is flowing back into NSW this week, but this time thunderstorms should be the talk of the town.

A deep low pressure trough will draw heat from central Australia into the east over the next few days. Western NSW will reach into the 40’s, but generally five degrees cooler than last week. Nearer the coast some places will merely see temperatures a few degrees above average, rather than record-breaking.

Thunderstorms will probably become the main news story as the low pressure trough utilises the renewed heat and some lingering moisture.

The storm risk develops on Thursday, but the most intense and widespread storms will be reserved for the weekend.

On Saturday, storms are likely east from a line from Brewarrina to Bathurst to Bowral. There are likely to be some severe cells, possibly even in Sydney. Damaging winds, heavy rain and large hail are all a risk in parts of the state.

On Sunday the trough will shift further northeast, bringing cooler air in its wake. The storm risk will primarily spread over the Hunter, Mid North Coast, Northern Rivers and Northern Tablelands. Again storms are potentially severe.