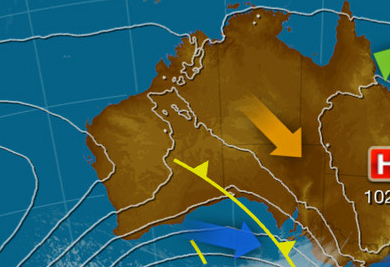 July temperature records were being broken across Western Australia on Friday.

A pool of unusually hot July air that was sitting over the state’s northern districts Friday afternoon was also being drawn south ahead of a cold front.

This pattern is causing abnormally high, record breaking temperatures to be registered in both the north and south of the state.

The Pilbara’s Roebourne reached 35 degrees shortly after 1pm, making this its warmest July day in more than 60 years of records. Last year, Roebourne didn’t get this warm until September 11th.

At the other end of the state and more than 1,600km away from Roebourne, Eucla had reached 30.3 degrees by 1:33pm. This is the site’s highest July temperature in more than 50 years of records, beating the old mark of 28.3 degrees from 1969.

Elsewhere in the state, Karratha had reached 34 degrees at 1:41pm, setting a new record in more than 45 years of observational history. Karratha didn’t get this warm last year until October 6th.

Some of these places may get even warmer during the next couple of hours, so the official July records may be even higher than they were as of 2pm WST.

The unprecedented July heat being experienced in WA today will spread across other states and territories to the east this weekend. As a result, more Australian July heat records are likely to fall during the next two days.