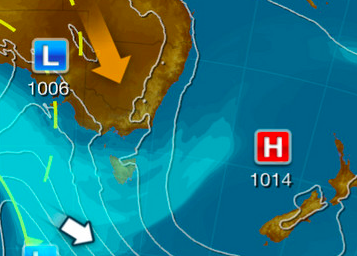 Victorians who experience breathing difficulties or asthma have been advised to take extra care this evening, with a cool change and thunderstorms predicted for the state.

Extra ambulance crews and other emergency staff have been put on standby, with the weather change expected to cross the state this evening and into Monday morning.

Dr Jonathan Burdon, chair of the National Asthma Council, said anyone who suffered from asthma should take precautions.

“If you are getting worse and your reliever medication isn’t helping, please go and seek medical attention early,” he said.

“If we have a similar issue to a couple of weeks ago, you know if the ambulance can’t get there, then you should get yourself to hospital by private car.”

A top of 34 degrees Celsius has been forecast for Melbourne with a late cool change expected to bring thunderstorms across the state.

Swan Hill in the state’s north-west is tipped to reach 40C.

The Bureau of Meteorology’s Dean Stewart said the weather would be different from the storms two weeks ago.

“There is an expected cold front that will move into far western Victoria this evening and that will work its way across the state overnight and during Monday,” he said.

“For the Melbourne area, there’s a slight chance [of thunderstorms] tonight but more likely in the early hours of Monday morning.

“The wind strengths aren’t anywhere near as strong, so there’s quite marked differences to this event but nevertheless there is the risk of some thunderstorm activity.”