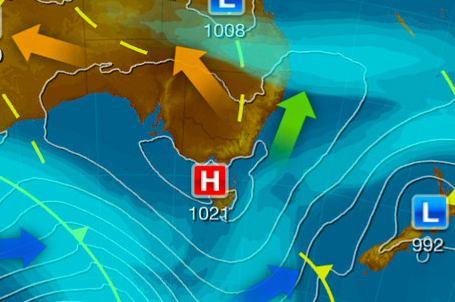 A late-season chill has recently hit Tasmania with frosts but the island state is about to gradually warm up during the next several days and nights.

Temperatures have dropped to as much as 10 degrees below average but by the end of the week should be as much as five degrees above average.

Saturday night was the coldest October night in 21 years at Flinders Island (-1.0 degrees) and 12 years for Launceston (-2.3 degrees at the airport and 0.0 degrees closer to town).

Other centres which just had their coldest night this late in the year in about a decade include Scottsdale (-0.2 degrees), Devonport (1.1 degrees) and Swan Island (5.6 degrees).

Cold winds in the wake of a front dried out so much and combined with clearing skies to bring this chill. Fronts such as these were a common feature this winter and early spring, delivering below average rainfall to northern inland areas.

Frost at this time of year can seriously damage plants including maturing winter crops.

Looking ahead, wind will gradually turn from southerly to northerly and draw some warmth from the mainland. By the end of the week, Flinders Island should stay warmer than about 15 degrees at night and reach the mid twenties during the day.