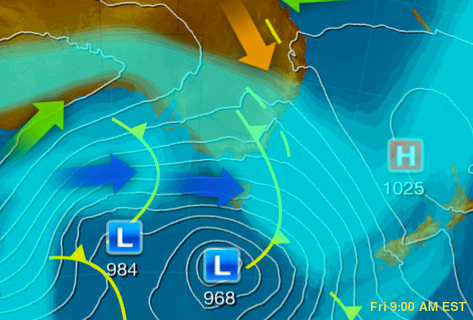 Flooding rain and damaging winds are likely to affect parts of Tasmania in the coming days as a series of cold fronts sweep across the state.

The procession of fronts will cause rain, thunderstorms and blustery winds in Tasmania between Thursday afternoon and Sunday.

While all of the state should experience some wet weather during the next three to four days, the heaviest falls likely to occur in the north and west, where some places could pick up 50-100mm.

A flood watch has been issued for Tasmania’s North East catchments, where riverine flooding may develop from Friday morning onwards.

In addition to the rain, damaging winds are also likely in parts of Tasmania during the coming days, starting from as early as Thursday night. A severe weather warning has been issued for gusts above 90km/h in northern and western parts of the state.

July is typically one of the wettest and windiest months for much of Tasmania, as this is the time of year cold fronts are most active over southern Australia.