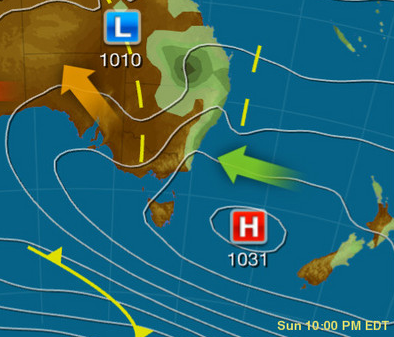 If you wanted to stay a bit warmer today in eastern Australia then a dip in the ocean is probably your best bet, despite the rain.

Ocean surface temperatures along the east coast are currently warmer than the 18 degrees in Sydney city, around 20 degrees close to the coast and above 24 degrees further offshore.

Temperatures further inland of the city are closer to the those over the waters, but are unlikely to go into the mid twenties today.

Rainfall over eastern NSW is being caused by a low pressure trough extending off the coast. Moisture availability is being enhanced even further by warm sea surface temperatures and onshore circulation.

The current wet and cooler conditions are expected to persist and intensify on Sunday, given that the trough will remain near its current position as it deepens further, enhanced by cool cold air from an upper trough.

It’s shaping up to be Sydney’s coldest weekend of the summer.