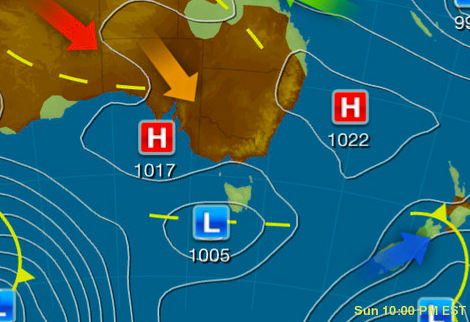 It’s an unusually warm April weekend in Adelaide. An extended break in the monsoon over northern WA has allowed hot air to build in the Pilbara during recent weeks. This heat is now being drawn south by a broad trough of low pressure and is about to cause an unseasonably warm weekend in South Australia.

Adelaide is forecast to reach 33 degrees on Sunday (with 29 degrees on Saturday) which would give the city an average maximum temperature of 31 degrees for the weekend.

This would be Adelaide’s warmest April weekend since 1987 based on the average maximum temperature and the warmest weekend this late in the season since 1958.

Adelaide’s average maximum temperature at this time of year is 22-23 degrees and the highest temperature on record during April was 36.9 degrees, from 1938.

The upcoming weekend heat comes after Adelaide’s driest start to a year since 1989. Only 14mm of rain fell in the gauge at West Terrace during the first three months of 2018.