Australia: Storms leave a white blanket on the Blue Mountains 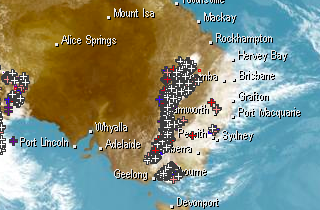 Parts of the Blue Mountains reported a covering of hail on Friday afternoon, as severe thunderstorms rolled through the area.

The ranges and western slopes of New South Wales experienced widespread thunderstorms yesterday, with severe thunderstorm warnings for large hail and damaging wind issued for parts of the state and the ACT.

Hailstones of around 3cm in diameter were observed on the Darling Causeway near Mount Victoria around 2pm in the afternoon. Images and videos on social media showed scenes akin to the middle of winter in some ways, although the white stuff in this case was not snow.

Over 13,000 lightning strikes were recorded within a 50km radius of Katoomba between midday and 4pm.

A large pool of upper cold air across the southeast of the country provided the instability required for thunderstorm development. Air at the surface was forced to rise, as onshore winds at the surface met the high ground of the Great Dividing Range, providing the trigger for many of the storms – which helps to explain why many of the storms were concentrated over the ranges.

Rain and showers are more likely than storms over the tableland districts of the state this afternoon, with thunderstorm activity mainly focused over western adjacent districts.