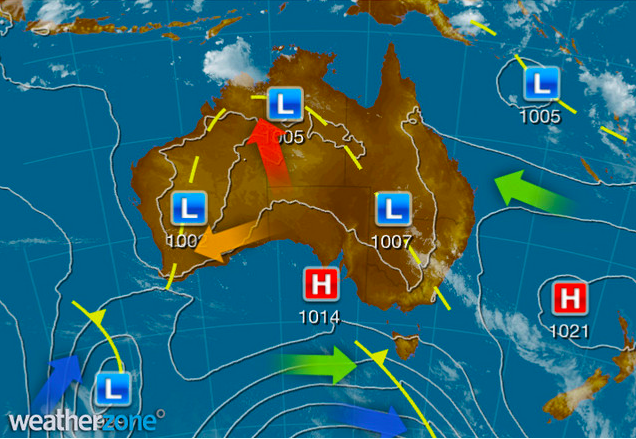 Another round of intense heat is about to sweep across southern and eastern Australia, challenging December heat records for the second time in a week.

A burst of hot weather swept across southeastern Australia this week, prompting fire bans in a number of states.

On Thursday, Penrith registered its hottest December day in 22 years of records after reaching a scorching top of 43.5 degrees, beating the previous record by more than a degree. This came a day after Melbourne and Adelaide reaching tops of 38 and 39 degrees respectively.

Now, another sweltering air mass that has been brewing over northern WA, is about to head south.

In the Pilbara, Tefler reached 45 degrees on Thursday afternoon and Marble Bar is forecast to hit 45 to 46 degrees during the next three days.

From this weekend, this pool of hot air will be drawn south by strengthening northerly winds ahead of an approaching – and unseasonably strong – cold front.

Parts of Australia’s central and eastern interior are forecast to reach 44 to 46 degrees between Sunday and Tuesday, including Birdsville, Thargomindah, Tibooburra, Bourke and Moomba.

Tibooburra’s forecast top of 46 degrees on Monday is 0.7 of a degree below its December record from 1957, with data available back to 1910.

Bourke could also register its highest December temperature on record if it reaches Monday’s forecast top of 44 degrees.

Thargomindah is tipped to reach 45 degrees each day between Sunday and Tuesday. The town’s hottest December day to date was 45.6 degrees in 1996 and it hasn’t had three days this hot, in any month, for 11 years.

Forecast models indicate that temperatures could reach 47 degrees in northern parts of SA on Monday.

Adelaide, Melbourne and Sydney will also experience another day in the high thirties or low forties early next week. In western Sydney, Penrith may even have a go at breaking its December heat record for the second time in a week.

The impending hot weather is likely to elevate fire danger ratings in a number of states. Be sure to check the latest fire bans and warnings as this event unfolds.