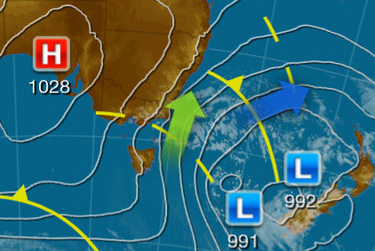 A wintry blast brought the strongest wind gusts in years and low level snow to parts of eastern and southeast Australia on Friday.

The apparent temperature at midday Friday, when taking into account wind chill, was 3 degrees in Sydney, -1 degree in Canberra, 7 degrees in Melbourne and 0.5 in Hobart, according to the Bureau of Meteorology.

Cold air, blustery winds and showers are being driven over the nation’s southeast by a deep low pressure system centred over the southern Tasman Sea and an associated cold front.

Wind gusts exceeded 100km/h in parts of Sydney and the Illawarra Friday morning, with some places experiencing their strongest gusts in 3-6 years before midday.

Nowra registered a wind gust of 106km/h in the morning, which was its strongest gust in six years. Elsewhere in the Illawarra, Albion Park (104km/h) and Bellambi Point (102km/h) had their strongest gusts in 10 months.

Around Sydney, Kurnell’s 102km/h and Fort Denison’s 93km/h Friday morning were the strongest gust in three years, while 106km/h on Sydney Harbour and 95km/h at Sydney Airport were the highest gusts in more than a year.

These wind gusts are strong enough to break large branches off trees and cause structural damage to buildings. There were reports from Fire and Rescue NSW and the State Emergency Service that a roof had been torn off a building in Wollongong, forcing around 80 people to be evacuated.

The low over the Tasman Sea (near New Zealand) is also dragging a large pool of very cold air across Australia’s southeastern states today, adding a wintry bite to the air and allowing snow to reach low levels.

Snowflakes were falling in the Central Tablelands of NSW this morning, including Blackheath in the Blue Mountains. Those waking up in Hobart could see white on top of Mount Wellington and a fresh cover of snow greeted guests staying at the Cradle Mountain Hotel.

Snow was possible above 300 metres above sea level in Tasmania Friday, 600 metres in Victoria and 900 metres in New South Wales.