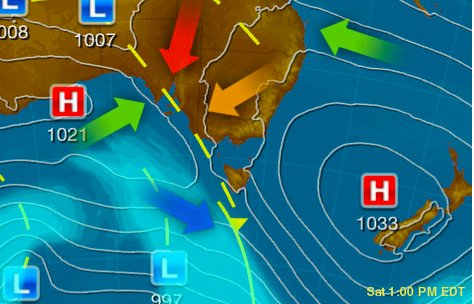 Hobart has just broken a 79 year old record with its hottest March day yesterday, Saturday, a record that has stood since 1940.

Just as summer concludes, Hobart has experienced an extreme hot day reaching 38.0 degrees at 1pm, a long way off from the average 20.2 degrees usually experienced in March. This is Hobart’s hottest March day since 1940 (previous record 37.3 degrees), hereby breaking a 79 year old record (records begun in 1883).

Adelaide (41 degrees) and Melbourne (37 degrees) were also feeling the heat yesterday as a trough ahead of a front funnels heat from the interior towards the southeastern capital cities. This warmer weather will move in to New Zealand this coming week too.