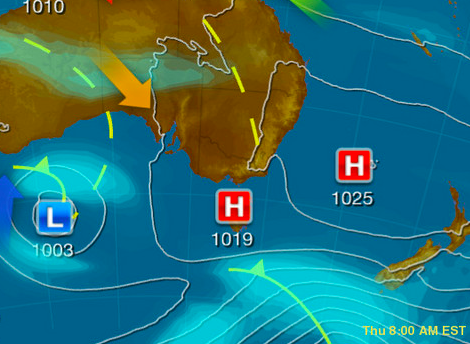 Autumn has been delayed across much of Australia this year, with NSW experiencing unseasonably hot weather during the first half of April.

A pool of exceptionally hot air for this late in the season was drawn across parts of central, southern and eastern Australia in recent weeks.

This air mass broke numerous records as it swept across NSW, as maximum temperatures consistently reached levels more typical of mid-summer than mid-autumn.

Pooncarie registered the highest temperature ever recorded in NSW during April, reaching 40.5C on Tuesday last week. This beat the previous state record of 40.0C at Collarenebri in 1922.

The statewide maximum temperature in NSW exceeded 32 degrees for five days in a row earlier this month, beating the previous record of two consecutive days this hot during April.

The heat helped fuel out of season bushfires in eastern NSW last weekend, one of which burnt through nearly 4000 hectares of land in southern Sydney.

In addition to the heat, much of NSW has missed out on decent rainfall so far this month.

Most areas of NSW on and west of the ranges received less than 20 per cent of their average April rainfall as of 9am on Wednesday. Cessnock’s 2.8mm during the first 18 days of the month makes this its driest April to date in 21 years.

Days and nights will inevitably become cooler as winter approaches, although maximum and minimum temperatures are expected to remain near to above average through the rest of Autumn.

Climate models suggest that rain will continue to be near to below average in western NSW during May and June.