Home > News > Australia: Rain on the way for parched N...

Australia: Rain on the way for parched NSW, only small relief for bushfires though 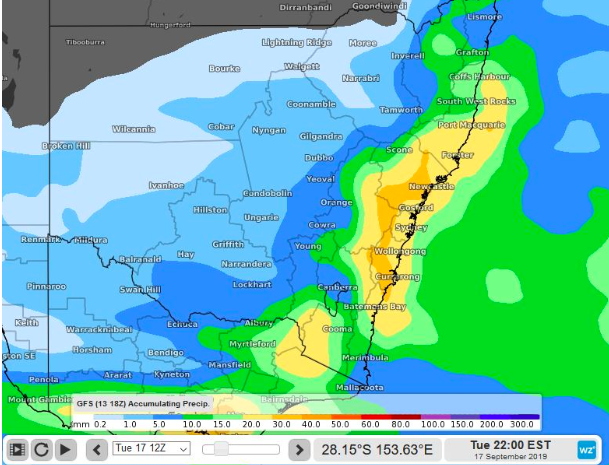 Widespread showers look to develop early next week, giving some parched parts of the state a needed drink.

After a warm and dry weekend for all of NSW, a cold front will cross the state from the south, bringing some welcome rainfall to the south of the state and the ACT. Canberra and surrounds are expecting to receive around 5-10mm on Monday. This front may also trigger a few storms around the Southern & Central Tablelands, and the Illawarra as it rolls through.

When this front hits the Pacific Ocean, it will form a coastal trough, directing moist onshore winds to the majority of the NSW east coast. Widespread 48 hour rainfall (Monday and Tuesday) of 15-30mm is expected from as far south as Batemans Bay to as far north as Coffs Harbour.

The best and most likely fall are expected to be around the Lower Hunter and Mid North Coast Regions, with as much as 50-70mm is possible for some lucky, isolated locations.

In the northeast, around 5-10mm is expected around the for parts of the Mid North Coast and Northern Tablelands still battling large bushfires. While this rain is unlikely to completely extinguish the flames, it will hopefully give the fire fighters an edge.

West of the divide, rainfall will unfortunately be far more patchy and light. Locations such as Dubbo and Tamworth are only expected to receive 2-5mm from this system, possibly missing out altogether.

The coastal trough bringing the rain will move east on Wednesday, giving way to the familiar high pressure system. However, a cold front crossing next weekend shows some early promise of further rainfall.