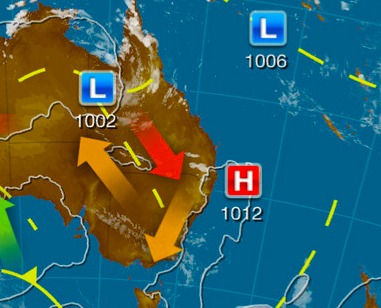 Heavy rain will spread through northwest Queensland during the next week, with some areas a chance to see records challenged and prolonged river flooding.

A low pressure system being fed by copious amounts of moisture travelled from Townsville to Cloncurry during the last two days. This overland journey left a trail of inundated catchments, flooded roads and burgeoning dams in its wake.

Remarkably, Townsville’s Ross River Dam has risen to 80 percent of its capacity for the first time since 2014 following this week’s deluge. This is up from just 15 per cent capacity in the middle of last week.

On Friday morning, the rain-bearing low was located over Queensland’s North West District near Cloncurry. The system will continue to produce heavy rain, blustery winds and thunderstorms today, prompting a severe weather warning for the area.

The low will continue spreading heavy rain and flooding through northwest Queensland into Saturday. There are indications that the low may venture further south into the state’s Central West District, although computer models are struggling to agree on where the low will move from Sunday onwards.

The location and intensity of the low will determine where and how much rain falls during the coming week.

Despite this model uncertainty, the low is likely to cause enough rain to cause river flooding in parts of northwest Queensland in the coming days.

The system will be capable of generating event rainfall totals of 200-400mm, with isolated falls above 400mm possible between now and the end of next week.

This much rain would challenge monthly rainfall records in the region and inundate river catchments. The impending deluge is likely to cut off roads and may cause significant and prolonged river flooding in outback Queensland.

The best place to find the latest information on the position and future movement of the low – and the resulting heavy rain – will be in severe weather warnings and flood watches issued by the Bureau of Meteorology during the next week. These can be found here: www.weatherzone.com.au/warnings.jsp