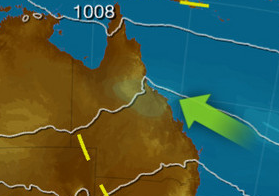 Heavy rain has fallen over Queensland’s far north and there is more tropical activity on the cards this week.

In the early hours of Sunday morning, the skies opened up over Horn Island with nearly 70mm falling over an hour, recording 144mm to the 24 hours to 9am Sunday. This makes it the wettest April day in 16 years, when 182mm fell on the 6th. Already Horn Island is up to 427mm this month, although well short of the 726mm that fell in April 1999.

Elsewhere in the Peninsula district, rain has been lighter and patchier. While the heaviest rain will be focused in the far north, falls of 20mm each day are possible as far south as the Lockhart River over the next three days.

As the pulse of tropical activity deepens and spreads west, parts of the Northern Territory’s Top End also will pick up some late-season rain. Depending on the track of the developing low around mid-week, parts of the NT could see daily falls in excess of 100mm.