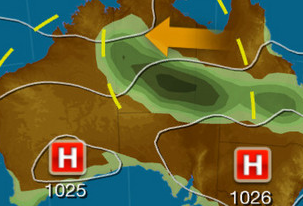 Heavy rain will develop in parts of central Australia this weekend, bringing a risk of flash and riverine flooding from Sunday.

An upper trough will combine with a feed of tropical moisture to generate heavy rain on Sunday and Monday.

The impending rain is highly unusual for this time of year.

Some inland areas of the Northern Territory that usually see less than 10mm of rain during July could be in line for 50-100mm in just two days.

The heaviest falls are expected to occur over the NT’s Simpson, Tanami and lower Barkly districts, where some roads are likely to be cut off due to flash flooding.

Rain will also also spread across parts of southern and central inland Queensland on Sunday and Monday, although falls in these areas will be lighter, probably around 10-20mm in total.

The impending rainfall may cause some ephemeral rivers in central Australia flow. You can keep up to date with the latest flood warnings at http://www.weatherzone.com.au/warnings.jsp