Australia: More Thunder Down Under 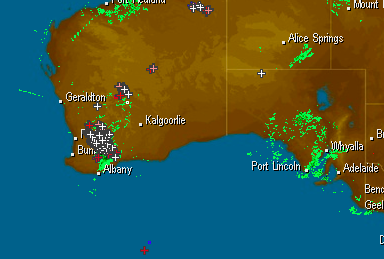 Severe weather season is definitely in full swing as every state proves likely to see a thunderstorm fire up in the next week.

Currently, lightning and thunder is continuing for interior parts of WA, NT and SA as tropical moisture is sucked south by a broad region of low pressure. This region will keep seeing storms at least through until the middle of next week, extending to the Top End. Darwin has a good chance of getting hit by a storm sometime from early afternoon today, picking up similar totals to yesterday’s storms (about 5mm at a time).

But the thundery activity will not be restricted to the tropics and interior. Outer suburbs of Perth are a chance for a storm this afternoon, especially west and south, but these are unlikely to head towards the CBD. Sunday is a much better chance from mid-afternoon as instability deepens and a trough broadens over the region. Storms look slow-moving, which means localised flooding is more likely than usual.

For the rest of the country, the time from Wednesday onwards should see the broad trough currently sitting over SA head east, leading to widespread rain and storms for VIC and NSW, eventually reaching into southeast QLD by Friday. Even Tasmania should get a look-in, as a weak low tracks southward across the island state, bringing with it a small amount of instability. Both Launceston and Hobart are a chance for lightning during Thursday.

As usual, keep abreast of the official thunderstorm warnings and advice by visiting our website or downloading our app.