Home > News > Australia: Hottest weather in half a yea...

Australia: Hottest weather in half a year on its way later this week 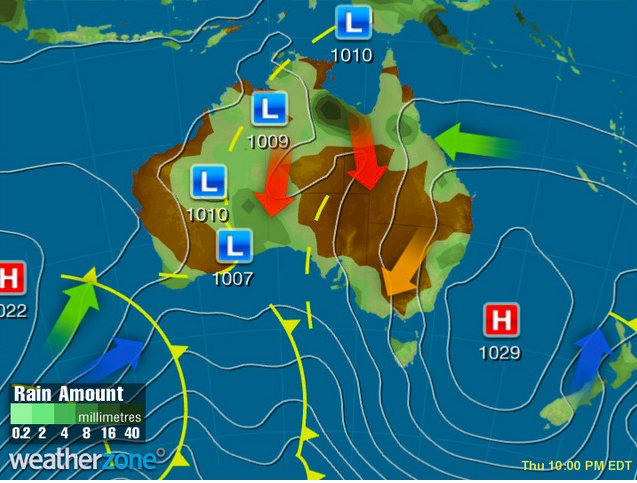 The hottest period since last autumn is expected to descend upon the southeast later this week with the Bureau of Meteorology forecasting a low intensity heat wave across much of NSW, as well as parts of SA and QLD between Wednesday and Saturday.

The hottest day is likely to be Friday when much of NSW should exceed 35 degrees, with western Sydney approaching 40 and the far west a chance of exceeding 40 degrees in places.

The heat will start in earnest from Wednesday once the residual cooling from this weekend’s southerly change dissipates. First, it will spread over the western plains and then encroach over the eastern ranges Thursday – even elevated Canberra is forecasting close to 35 degrees on Thursday. Friday will see it extend over the southeast coasts and western Sydney as coastal seabreezes can no longer hold back hot northwest winds.

The heat will be caused by an inland trough drawing hot tropical air southwards. Since part of the in-feed to the trough is from over the Coral Sea, this hot air is also humid and will make the hot days feel even hotter. The humidity does however also increase the probability of thunderstorms bringing localised cooling (and possible rainfall). Friday and Saturday near the change are the most likely days for storms. The blanketing high humidity will also lead to a likely hot night for many locations Friday.

A cooling southerly change should bring rapid cooling to at least the coastal south on Saturday. As ever, this far out the timing is not precise but the change should reach central parts of the coast by evening, dropping temperatures 10-15 degrees in its wake. The inland will get a drier burst of winds with the change but only minimal cooling with the likely shallowness of the change, and so heat will persist through next weekend.