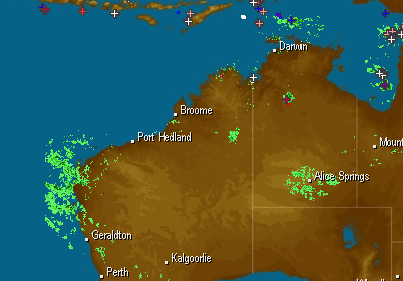 On Monday, Blanche became the first cyclone of the season to make landfall when it crossed the Kimberley coast to the north of Wyndham.

Once over land the system rapidly weakened and was downgraded to a tropical low. Despite no longer having cyclone status this morning, BlancheÃ¢??s dying breath was strong enough to produce a damaging wind gust of 91km/h at Derby shortly before 8am WST.

Winds have now eased and the severe weather warning that had been in place for the region the morning was cancelled at 1pm today.

The only remaining threat for the Kimberley is flooding. Heavy rain that has already fallen and further showers and storms in the middle of the week may cause river level rises and cut off road access in some areas.

A Flood Watch and flood warnings were in place for parts of the Kimberley this afternoon. A Flood Watch also covered the North West Coastal Rivers of the Northern Territory.