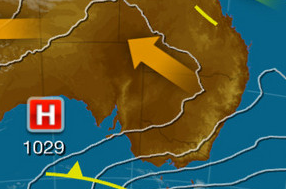 This year’s bushfire season has the potential to be worse than usual in parts of NSW.

A number of factors influence the potential for fires, including the amount, location and timing of rainfall leading up to the fire season, as well as temperature and rainfall outlooks for the months ahead.

The lead-up to spring this year was notably dry and daytime temperatures were well above average for much of NSW.

The state as a whole registered its driest winter in 15 years and the ninth driest on record. Parts of the Central West had their driest winter on record, including Parkes and Bathurst. The only district to see above average winter rainfall was the Northern Rivers, due largely to heavy rain in June.

Based on daytime maximum temperatures, NSW had its third warmest winter on record. Some places in the central and northern inland had their hottest winter on record in terms of maximums, including Collarenebri, Bathurst, Trangie and Gulgong.

Last season’s dry weather and warm days helped increase fuel loads for most eastern forested areas of NSW, with the exception the far northeast. One positive outcome of the below-average winter rain was a reduction in grass growth west of the ranges, which has reduced grass fuel loads compared to last year.

In contrast to the warm days, NSW experienced an abundance of cold and frosty nights last season. The state as a whole had its coldest winter in 20 years based on minimum temperatures. Unfortunately, cold nights during winter do little to reduce the bushfire potential in spring. Frost also causes grass to cure early, which can enhance the potential for early-season grass fires.

Looking ahead, there are no strong indications from climate models that temperatures or rainfall will stray far from average during spring. This is primarily due to neutral conditions in the Pacific and Indian Oceans, with El Nino, La Nina and the Indian Ocean Dipole all unlikely to influence Australia’s weather during the months ahead.

Combining the conditions experienced during winter with what is expected in the months ahead, most districts in the eastern half of NSW are predicted to have higher than normal forest fire potential this season. Grass fire potential is predicted to be near-normal due to reduced fuel loads.