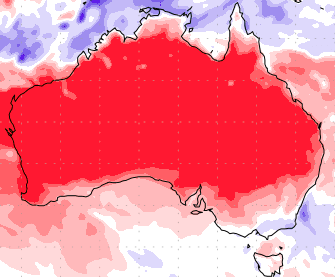 Brisbane has continued its run of sultry weather by notching up its warmest March on record.

Queensland’s capital city had its warmest summer on record in terms of average temperature (combined minimum and maximum) and has followed suit at the start of autumn.

Last month was the city’s warmest March on record with an average temperature of 26.3 degrees, which is an impressive 2.2 degrees above average. Nights were the warmest on record for the city and days were the second warmest.

It wasn’t just the city’s weather station that registered impressively warm numbers either. Brisbane Airport, Archerfield and Logan all had their their warmest March on record in terms of average temperature.

Queensland as a state had their second warmest March on record for average temperature. Near-average daytime maximum temperatures in parts of the Darling Downs, Central Highlands and Gulf Country Districts prevented the state from setting a new personal best.

Rainfall was well above average for much of central and southeast Queensland, largely due to the passage of Cyclone Debbie at the end of the month.

Brisbane had its wettest March in 43 years with a total of 298mm during the month. It was the wettest March on record for Oakey and Amberley.

Drier than usual pockets covered the southwest and parts of the north.

Looking ahead, warm and dry conditions are favoured by forecast models across most of the state during the rest of autumn. The exception is the far north where cooler and wetter than usual weather is favoured during the months ahead.

Perth had a fairly cool March with rain falling more frequently than usual.

The city had its coolest March in 18 years based on the average maximum temperature of 27.9 degrees. The average minimum of 16.4 degrees was its coolest in four years.

It was also Perth’s wettest March in four years, although the 11 rain days recorded during the month were the highest on record at the current site.

Western Australia as a whole was the only state whose March wasn’t among the top four warmest on record. Statewide maximum and minimum temperatures were only 0.5 degrees and 0.6 degrees above average respectively.

Cloud helped keep maximum temperatures down and also caused plenty of rain. The statewide average rainfall during March was more than 40 per cent above the long term average.

Looking ahead, most of the state is expected to experience above average maximum temperatures and below average rainfall during the rest of autumn. The exception to this outlook is the northern Kimberley, where conditions should be cooler and wetter than usual.