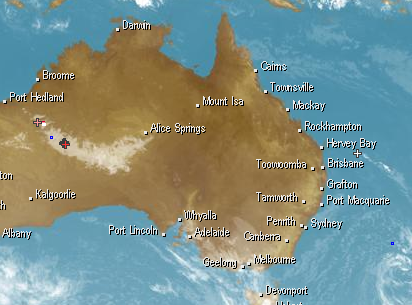 Sydneysiders were woken up Wednesday morning by a loud bang that may have been caused by a rare type of lightning.

Storms developed over eastern New South Wales overnight as a low pressure trough moved over the ranges from the west. Mount Elliot on the Central Coast collected 21mm of rain before 9am, although Sydney only picked up 0.8mm in the city and 8mm in Campbelltown.

However, rainfall was not the most impressive feature of the early morning storms.

Lightning produced unusually loud thunder that was heard across much of the Sydney Basin, particularly the northern suburbs. It was loud enough to rouse people from their sleep and in some areas, set off car alarms. The word ‘thunder’ was also trending on Twitter following the storm.

There is a good chance that Wednesday morning’s thunder was made louder than usual by a something called ‘inversion lightning.’ This rare but well-documented phenomenon causes sound from a cloud-to-ground lightning strike to be trapped near the ground instead of dissipating vertically into the sky.

A temperature inversion happens when cool air near the ground lies below a layer of warmer air. This creates an invisible boundary in the sky that separates two layers of air with different temperatures and densities. Sound produced near the ground bounces off this inversion boundary and can travel much further than it typically would.

Air temperature measurements from Sydney Airport on Wednesday morning show that an inversion was in place near the surface at 6am, shortly after the loud thunder was heard.

Temperature inversions also cause sound from mining explosions to reach far-away towns and they can cause fog to become trapped near the ground for hours after the sun rises.