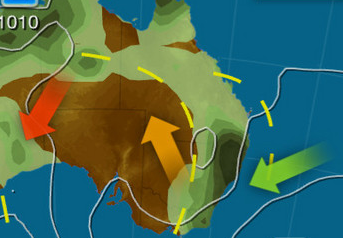 Coastal New South Wales will see a short break in the rain as we head towards the weekend, but there is more rain on the way.

Up and down the NSW coast, a lingering low pressure trough and a large low brought rain to kick-off autumn over last weekend and for much of this week.

While patchy showers and cloudy skies have remained around the coast since Monday, some sunnier skies are on the way. As a ridge of high pressure builds along the coast, conditions will become drier, warmer and sunnier, with this weekend looking to provide some excellent washing weather.

As a new week approaches, so does a large rain-laden system. For most places along the coast, Monday will see the conditions deteriorate. By the time next weekend rolls around, southeastern NSW could see another 20-50mm of rain, but all other eastern districts could be looking at falls in the range of 50-100mm. For the Mid North Coast and Northern Rivers, weekly rain totals could exceed 150mm.