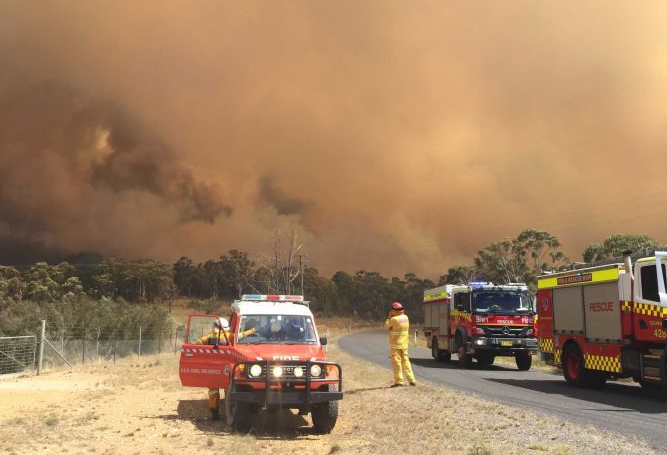 At least 15 homes have been lost in a fast-moving, out-of-control grassfire burning near Carwoola in New South Wales, as police warn that number may grow once more information comes to light.

Despite the warning being downgraded to watch and act just after 8:00pm (Friday), the 2,700-hectare fire is still burning out-of-control in an easterly direction near Queanbeyan in the area of Captains Flat Road at Carwoola.

There are currently 89 bushfires and grassfires burning across the state, with 71 uncontained so far â€” many that are believed to have been started by lightning strikes.

Queanbeyan Police Superintendent Rod Smith told ABC Radio Canberra many houses had been lost in the Carwoola fire, and the number was expected to increase.

“Unfortunately we’ve counted at this stage 15 homes that have been lost, particularly around the Widgiewa Road area, but still no reports of any injuries [to home owners] which is great,” he said.

The New South Wales Rural Fire Service (NSW RFS) confirmed there had been “extensive property losses” but said the exact number would not be known until conditions eased.

Earlier on Friday two firefighters were injured in the blaze and were taken to hospital, neither with serious injuries.

Many people in the areas of Hoskintown, Rossi or Forbes Creek are either sheltering in their homes or at emergency evacuation centres.

The RFS has advised people in Primrose Valley and the Captains Flat township not to leave, as the road north is affected by fire.

On Friday afternoon school children travelling on buses were redirected to the Q Theatre at Queanbeyan where an evacuation centre had been set up.

Another evacuation centre is located in the hall at the Bungendore Public School.

Large firefighting aircraft are assisting crews and trucks are being brought in from the surrounding region.

More than 120 firefighters and support staff have been sent from the Canberra region to help battle the blaze.